This story is so bizarre that I couldn’t make it up if I tried.

I was in excruciating pain from what appeared to be an issue with one of my back teeth. The tooth in question was covered in a crown that was placed on it three to five years earlier.

When I arrived at the dentist office I was seated in the chair and had my eyes closed while they took x-rays of my mouth. The moment that I closed my eyes, I saw a flash of an image that looked like some weird monster characters that you see on products for kids. It was odd and I opened my eyes and asked God what on earth was He trying to show me. I didn’t get an answer, but I had to take another x-ray and when I did, I saw that same image flash in my mind of the little creatures. I was excited to find out what was going on with these images, but I quickly forgot about them as the appointment went from painless x-rays to a fierce extraction of a crown.

The dentist worked for what seemed like thirty to forty minutes pulling and tugging and twisting trying to take the crown off of the tooth. He was getting frustrated and had broke two of his dental instruments so far on this one tooth that refused to let go.

As he asked his assistant to retrieve yet a third tool that he could use, he said, “This is crazy! It is almost like this tooth is mocking me!” He went on to say how much effort and the ways he had been trying to pull the crown off of it that were all unsuccessful. As soon as he said the tooth was mocking him, I instantly saw that image in my thoughts again and it just clicked that it was a mocking spirit that was responsible for my misery under that crown.

As the assistant returned with the new tool, I closed my eyes and in my head said, “In the name of Jesus, I take authority over you mocking spirits-GO NOW!”

I truly wish I had a video recording of what was happening in the natural, because the dentist sort of made a shrieking sound like he was startled and he began laughing with the assistant as they were amazed at what they just witnessed. He then began sharing with me how he hadn’t even touched the tooth yet, and it was like the crown just jumped into the tool. He said to the assistant, “Did you see that?!” She replied, “I did! That was crazy!” As they laughed and finished the procedure I thought over what had just happened and whether or not I should take the risk of sounding crazy and tell them what had happened from the spiritual side of the ordeal. I could hardly believe it and I have seen many supernatural things and witnessed many miracles, so I chose to not share my side of the experience with the dentist that day.

I was able to share with him how much good he could do by helping at a local boys group home in Queen Creek that houses hundreds of teens in state foster care. He agreed to search more into that, and when I went back for my next visit he was no longer working for that office.

I still don’t know the full extent of what or why these mocking spirits attack, but my daughter is dealing with an ear infection that was finally healed and now the other ear is hurting her. I have a sense that I am recalling this story today for her benefit. When something keeps coming back that should not be an issue, and has no reason to be causing suffering, I dare you to consider this as an opportunity to take authority over these mocking things and boldly tell them to be gone in the name of Jesus!

No one has to know about what they look like, but they sort of resemble the photo below. I told you that I couldn’t make this up if I tried!

We are a new creature in Christ, and we don’t have to live with the monsters anymore! We are now seated in heavenly places and have access to all the tools we need to thrive. 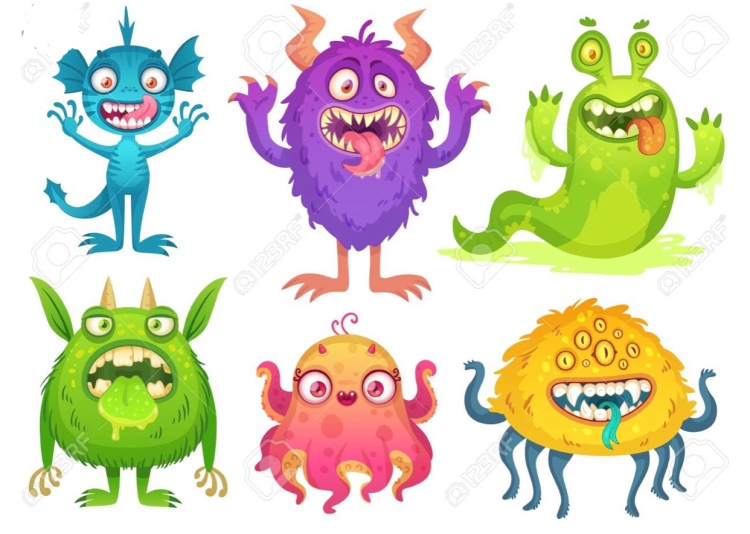